"... the park is a treasured piece among the district’s natural areas. “We don’t have that many wetlands,” he said.“That’s for sure, we just don’t have them.” ~DNV's Trails and Habitat Coordinator, Graham Knell, told the North Shore Outlook (DNV polishes Mackay Park Jul-10-2008):
Mountain View Park wetland and upland area is an


Formerly called "Twin Lakes",  Mountain View Park was dedicated in 1999, in a referendum vote during the District of North Vancouver election.


http://www.dnv.org/upload/documents/bylaws/7114.pdf
This section will include items of interest about Mtn. View Park, "urban" parks and wetlands, in general, and how mountain biking activities are detrimental to the ongoing ecological health of these natural places. Nature vs. Mountain Biking:
What can make nature education and outdoor exploration  more enticing than mountain biking for our children and young teens? You would think a nature walk couldn't compete with such adrenaline sports like mountain biking. Think again!
Let your children lick slugs. Why slugs? Because slug slime is an anesthetic! One lick and your tongue goes numb. Very cool! And stream dipping!  Many children will find that a wild ride on a mountain bike can't compare with the thrill of catching a salamander with your bare hands (and then letting it go free, of course).
Our children need to get up close and personal with nature, in order to appreciate and respect it. They will learn to reinforce their five senses and powers of observation to really get to know the natural world.*
Our young people cannot learn that kind  respect and care for nature on the backs mountain bikes, while wearing  full-face helmets, racing down trails in the forest. They cannot learn to respect the natural world if they continue to learn to conquer nature via indiscriminate off-road mountain biking and off-trail digging habits.
How can we instill real appreciation and respect of the natural world in this day of adrenaline producing extreme wreckreation? Don't send them to mountain bike camps, take them to the Lynn Canyon Ecology Centre,Maplewood Flats Conservation Area,  etc. Sign them up for the Mt. Seymour Eco-Adventure Camps
And, please, teach them to keep the wheels on the pavement and not on the forest and park trails. It will go a long way to preserve what still remains of our natural places. Thank you.
(* Info and excerpts,  from Leah Kostamo's, "Planted: A Story of Creation, Calling and Community", pg 71-72 , Cascade Books Publishing, 2013)

This opinion piece was supposed to be published in '"The Global Canadian" (a new local North Shore newspaper) in October, but the NSMBA declined to be involved in the debate on mountain biking trails on our North Shore mountains. It is now out of date since the NSMBA have been rewarded an agreement to "maintain" the trails with RSTBC on CMHC land on Seymour, after riding and building illegally on federal Crown land for so many years. How can they "debate" that, I wonder? Here is my piece that did not get published due to the NSMBA's "shyness" on the whole mtb activities subject:

"The High Cost of Mountain Bike Trail Building"
----------------------------------------------------------------------------------------------
In 2007 I was told by a couple DNV Parks staff that they were concerned about slope stability issues around mountain biking trails.
Mountain biking as practiced by members of the North Shore Mountain Bike Association (NSMBA) prefer a style of cycling where one is always facing new challenges.  Freeride mountain bike culture is all about regularly building new trails and challenging structures along with both on and off-trail riding habits. The NS community is entitled to ask WHY this need for constant new trails. Largely through the complicity of NV District there are now far more mountain bike trails in the District Alpine areas which create more barriers and open areas for predation of smaller mammals and amphibians. They become confined to fragmented habitat “islands” which restrict breeding and species gene flow.
The NSMBA also likes to refer to their many trail realignments, bypasses, reroutes of older trails as “maintenance” of those trails. This is NOT maintenance but a whole new trail build. This is needed because their trails become heavily eroded and compacted through indiscriminate riding habits. Much of this new trail building happens on rather “pristine” areas of the forest, with thick ground cover. This vegetation is usually a critical food source for wildlife. This gets torn up by a crew of trail builders, often supported by corporations who pay the NSMBA for the privilege. Healthy ground cover along with undamaged tree root systems is important for slope stability and the overall ecological integrity of the forests.
Climate change issues are becoming more obvious in North Vancouver and the need to preserve our “natural capital” is greater than ever. Upper Lynn Valley gets an average of 4000mm of rain per year. What worth is a damaged temperate rainforest watershed than can no longer hold water effectively to prevent debris flow and flooding issues? Not all of this is due to mountain bike activities -- but it is a very significant factor particularly when they ride 12 months per year! The Thames Creek Debris Basin projects cost us total (2015 and 2017) over $1,000,000. This is one example of the high cost of debris flow mitigation work across North Vancouver which has been projected to cost $7,000,000.
Mountain bikers also “rock armour” trails (akin to Roman roads) which can channel water, becoming like a raging creek during heavy rainfall, reconfiguring natural drainage and pouring silt and forest debris downslope into fish-bearing creeks.
Mountain bikers require a lot of dirt and rocks to pack on their trails. This is mainly being dug up off-trail, creating a myriad of “borrow pits”. The NSMBA boasted that they had dug up 42,000 five gallon buckets of dirt during 2016, alone. To put it in better perspective, this is 210,000 gallons (798,000 litres) of dirt. It is like filling up a Junior Olympic-sized swimming pool! Now, multiply that over the many years mountain bikers have been building trails, both authorized and non-authorized. There is still an element of rogue mountain bike trail building still happening on our North Shore mountains.
Trenches have also been dug by the NSMBA trail crews in order to accommodate their challenging structures such as berms and jump ramps. Many of their roller coasters, teeter-totters, wall-rides etc. rightly belong inside recreational resorts or private bike parks – NOT inside our public forests which effectively exclude other forest users.
It is time to limit the number of trails on the mountain slopes. I strongly urge the NSMBA and its members to practice much greater restraint in their present activities. The ecological integrity of the slope may soon be challenged even more powerfully as the E-mountainbiking industry is now jostling for a place on the trails across North America.
Freeride mountain bike trail sprawl across the North Shore is NOT sustainable (Joe and Jill taxpayer are paying dearly for it all). Why is DNV Council funding $100,000 per year to the NSMBA?
(In context, this piece would have been published around the 3rd anniversary of Lynn Valley's heavy debris flow and flooding incident which occurred on November 3, 2014) 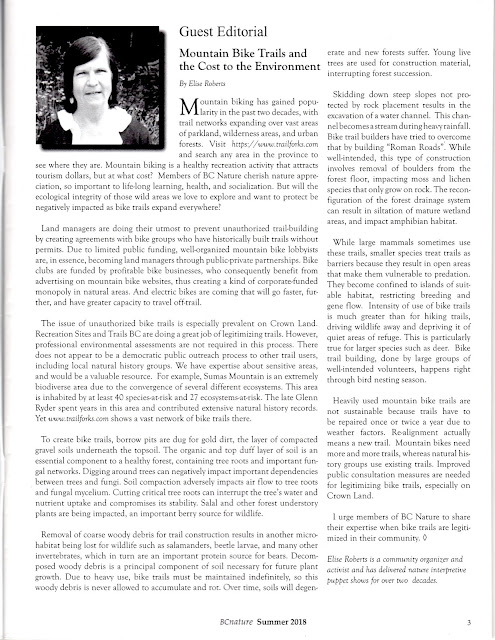